In the year 1860, Frederick Schaale, a blacksmith, purchased a lot located at the southwest corner of Philadelphia and Penn Streets. At that time, his property was valued at $275.00 with an annual property tax of $2.12. Three years later, Mr. Schaale built his residence on the property. In 1868, Charles F. Schaale, a relative, moved into the residence and went into business as a Merchant Tailor and Grocer. The property remained in the Schaale family until 1890.

From 1890 to 1911, the property was transferred to several different owners. In 1911, John Schrantz opened a cigar store bearing his name. Through the next few years this location remained a cigar store. In 1921 it became Dairyman Bros. Cigars. In 1923, it was renamed Miller Bros. & Dellinger Cigars, the West End Smoke Shop during 1925 and finally, in 1933, it became the Roosevelt Cigar Store owned by Washington C. Lauer.

In those days, cigar stores were very popular. Remember, in 1919 our Congress passed a law that became known as prohibition. Many of the cigar stores were used as a front for that infamous back room called a speakeasy. Some other back rooms were used to house some gaming tables. Such was the case at the Roosevelt Cigar Store.

Then came that most joyous year of 1933; Prohibition was repealed! At that time, for some strange reason, Washington C. Lauer removed his Roosevelt Cigar Store sign, and guess what? It was replaced by a sign that read Roosevelt Tap Room, phone number 64127.

In 1946, the business was purchased by James “Burkie” Burkholder, at which time the name was changed to the Roosevelt Tavern and an additional dining area was added shortly thereafter. Don Wolcott purchased the property from “Burkie” in 1969 where he started “Servomation Catering” and later “Wolcott Catering”.

In the fall of 1978 six young businessmen purchased the property (Don Hopper, Mike Gross, Jeff Bower, Dave Heim, Phil Weekor & Curt Wagner) They opened in March of 1979 (3 weeks before the 3 Mile Island Incident) and promoted the restaurant as “The Roosevelt Tavern” and the bar as “Annie Tiques” ( A play on the antiques adorning the inside of the building) and the establishment catered to young professionals. Iced Teas were introduced here for the first time in York and were popular on Thursday “Ladies Nights”. Live Music started on Sunday evenings in 1980 and featured on a regular basis popular local and regional bands including Billy Price & The Keystone Rhythm Band who became quite a hit in the area.

In 1984 Bob Schimmel Sr. purchased the property and “Archie’s Inn Towne” was established. “Archie’s” was probably best known that infamous car that came crashing through the front dining room window in 1985! The establishment was changed back to the historic name of “The Roosevelt Tavern” in 1993. To this day, the restaurant remains family owned and operated.

In December of 2011 York County native Byron Kehr Jr & wife Lauren reopened the tavern. They have recreated all of the menus with the Farm To Table mentality. To help us maintain the highest level of quality we have partnered with local farmers Skyblu Farms, Camelot Valley Cheese Company, Green Hills Farm & Groff’s of Elizabethtown. Stop by and see the exciting changes that we have made to the long time York local favorite restaurant. 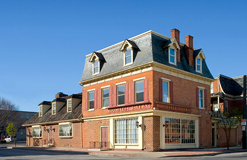